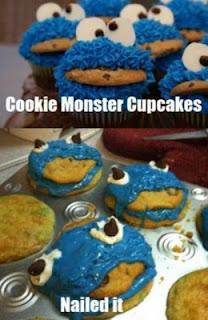 There are some recipes that take some serious talent to screw up. Those pancakes that I always rave about - that's one of them. But there are other recipes.... Well, we all know those recipes. You find the recipe on Pinterest or in a magazine and it just looks so good, but it never seems to turn out that way. It's the kind of recipes they give to culinary students as a final exam before they're allowed to graduate. I'm gonna talk about two of those recipes and how badly I botched them up.

The first recipe came around Christmas time. To preface, I adore eggnog! It was a family tradition of ours to take the richest, fattest eggnog we could find at the store, and mix it with diet Seven Up, because who can afford the calories of mixing it with actual Seven Up?! Now if you've ever seen one of those Mentos and Diet Coke videos on YouTube (if you haven't I HIGHLY recommend you look some up) you'll understand me when I say this concoction  fizzled and bubbled like crazy. You almost had to pour the Seven Up drop by drop just to prevent your drink from ending up on the floor. Well, it was my first Christmas on the SCD, and I was to have dinner with another SCD couple I knew and frequently dined with, the Thornocks. In fact, to side track a little, Chase Thornock is the one who first introduced me to the diet and I have him and his amazing wife to thank for the amazing results and blessings I've received recently.

Back on track... We decided that, seeing it was Christmas time, we were gonna both make Christmasy(?) ... Christmassy(?)... Christmasey(?) (roll with it.) food. Well, I was seriously in the mood for some eggnog that day. So, being the adventurous man that I am, I decided to face this recipe head on and make the most kick butt eggnog!

But, if you read the title of the post, you'll know that it just failed. And by failed I don't mean that it was a bad recipe and just tasted like dirt. No, I mean really failed. The egg curdled into this thick slime monster of a drink that you'd have to use a spoon to eat. Like you'd want to eat it anyway because it tasted like dirt that a chicken laid an egg in. It was just abhorred. And it was a real shame too, because for a while there I thought I was set. It was looking good, it smelt good, and all the pieces were just falling into place. Then I blinked, and everything just crashed. It literally went from heaven-sent to tapioca pudding in a matter of seconds. So, I cried a little on the inside and vowed to leave eggnog to the professionals.

The second story has a little different feel to it, but a completely opposite outcome.

My mom is a phenomenal cook. In fact, she teaches foods at the local high school. You'd think that being her son, I'd naturally inherit her talents and abilities. Normally that'd be the case, but seeing that I'm adopted, I got jack squat from her in that department. This story deals with a recipe of hers that she just makes with ease while the rest of us mortals just suffer trying to make something even remotely close. That recipe is Hollandaise Sauce.

Gasp! The horror! Just those two words instill fear into the hearts of amateur cooks everywhere trying to make a decent sauce for their holiday traditions. Yes, I was one of those amateur cooks who thought they could make THE Hollandaise Sauce.  And as this blog post intails, my first few attempts were just tragic.

I actually wanna recall the story of a few weeks before I went onto the SCD. I remember, a few years earlier, my mom made this heart melting meal I'd never had before: Eggs Benedict. Oh was I addicted to Hollandaise Sauce from that first bite. And of course, my mom being the professional she is, passed off the recipe as though it was just another meal. But it wasn't. It was far more than just another dinner. It was something that would change the way I looked at food, an entire paradigm shift of the sheer brilliance of what a few simple ingredients could produce.

So, fast forwarding a little, I decide to bust out this recipe for my roommate and I, not knowing what exactly went into making this sauce. And also keep in mind, cooking for me at this point was busting open a box of Mac and Cheese and knowing how much milk and butter I needed to mix in to get the cheese sauce to come out right. Like you could screw that up! Let's just say I made a few mistakes on that first attempt.

Mistake #1: I didn't have a double boiler. Heck, I didn't even know what a double boiler was! So what I did was fill up the largest pot I could find with water, and floated a glass Pyrex bowl about 1/3 the size on top. Mistake #2: You want to cook Hollandaise Sauce using water that's just about to or is just barely beginning to simmer, to keep your sauce from cooking too quickly. MY water, was violently boiling. Mistake #3, I didn't fully understand what they meant by stir constantly. I was so casual about this sauce. I would stir, then go talk to my roommate, then add in the next tablespoon of butter, then go watch a YouTube video. Needless to say, it curdled like it was nobody's business. And I panicked! I didn't even know that was an option for the sauce. I just thought that it went from creamy to more creamy. I didn't know it could go from creamy to 5 month old chunky milk. And just like the eggnog, I literally blinked and it curdled. Mistake #4: Saving the sauce for me was adding in all the rest of the butter at once and taking it off the heat immediately. Mistake #5: going along with Mistake #1, I had a floating glass Pyrex bowl as a double boiler. When I tried to grab it with my hand, I about permanently scorched off my fingerprints. So I tried to use an oven mitt. That didn't work out either seeing that in order to grab the bowl, the oven mitt would have to be submerged in boiling hot water, along with my hand. So in trying to finagle my two options, I managed to dip the edge of the Pyrex bowl into the water, leaving me with a heavily watered down sauce of melted butter and egg curdles. And bless my roommate's heart, he and I ate still made Eggs Benedict, and despite all my mistakes, the meal didn't taste half bad (but let's be honest, anything with bacon tastes good, so I can't say much about my cooking.)

Now I share this story second because, as you may or may not be aware, Hollandaise Sauce is one of the recipes on my blog. In fact, it was featured on a very famous SCD blog, scdlifestyle.com, and now sits at over 250 page views, putting it at the most visited recipe on my blog. To think, I completely botched that recipe the first time I made it. In fact, the second time went about the same as the first, but I had an actual double boiler instead of a ghetto Pyrex bowl, and instead of water, I had paint chips mixed in from the boiler. Oops! But that's not the point. The point is that I got up and I did it again, and again, and again, until I had something that was worthy to be called Hollandaise Sauce. In fact, I was at a dinner about 6 months ago, and my asparagus Hollandaise Sauce combo was the biggest hit of all the dishes there. It's because I let go of my inhibition. I threw away my comfort zone and tried something new. And when I failed, I brushed myself off and tried it again. Now, I have something to show for it: a good recipe, a great sauce to add on those disgusting eggs om mine, and a stronger will to never give up.

Questions? Thoughts? Personal fail stories? Leave it in the comments below!
Posted by AJ Heaps at 10:40 PM

AJ Heaps
I was diagnosed with Crohn's disease about 5 years ago while I was still in high school. 4 colonoscopies and 3 types of medication later, I decided enough was enough. I started the SCD (Specific Carbohydrate Diet) in July of 2012, and have been faithful to the diet since. I created this blog to show that a poor college student with way too much homework and dancing on his plate can still manage to be successful at the SCD.